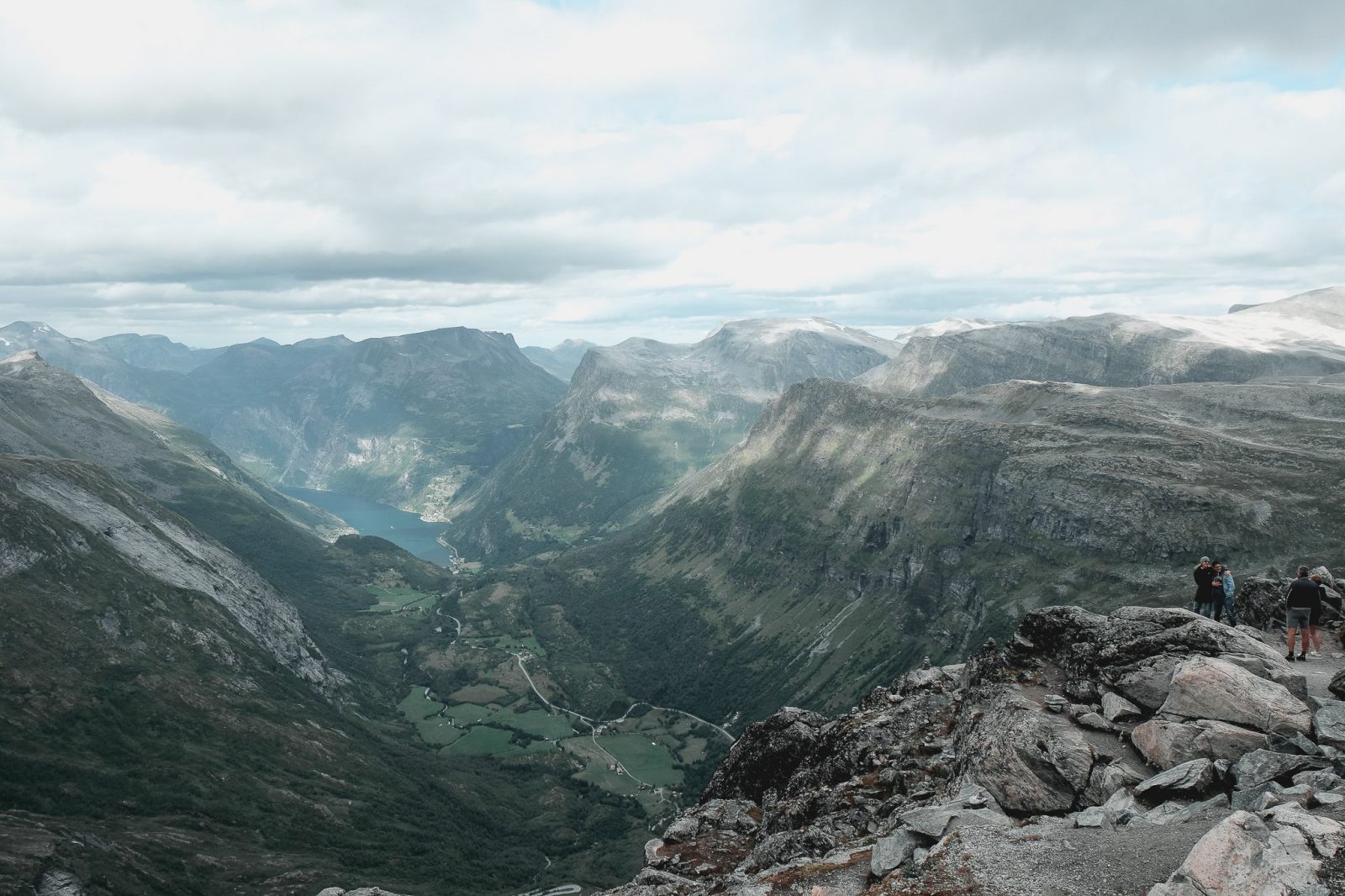 The History of Oslo

Termed ‘Europe’s highest fjord view from a road’, Dalsnibba viewpoint gives you an incredible view over the village of Geiranger and the Geirangerfjord. Located 1500m (4921 feet) above sea level, it’s a truly spectacular sight. It is somewhere I take private groups, and while I definitely think it’s worth making the trip to the top, there are some things you need to keep in mind.

Regarded as one of the most ambitious road-building projects ever seen in Norway, it’s unsurprising that it took almost one hundred years before the road went from idea to reality. The plan to build a road was first mentioned in the mid-19th century, however back then Geiranger was a tiny farming village. It wasn’t until cruise ships started to arrive at the beginning of the 20th century, and a little later the addition of motorised vehicles, that the road was put into action.

Construction for the road began in June 1937 and around fifty men were working on the road. It took two years to build and had an unofficial opening in 1939. It was unofficial due to the outbreak of the Second World War, in which Norway was occupied and tourism became non-existent.

It wasn’t until 18 July 1948 that the road was officially opened, and it tied in with the visit of the first tourist ship to visit the Geirangerfjord since the end of the war.

Since its opening, the road has become increasingly popular, and due to a steep rise in tourism, the road has been asphalted and widened to two lanes to allow for tourist buses to go up.

The view is undeniably incredible. For me, I like how clearly it shows how the landscape has been carved out by glaciers. The uneven mountains and rocks in strange places highlight this, and the valley down into the fjord is steep. You also see the village of Geiranger and the Geirangerfjord.

You can also see a glacier – it’s very small and not one of Norway’s famous ones, but it’s still great to see!

The viewpoint has restrooms and a souvenir shop. The shop is pretty similar to the one’s down in the village, but it’s worth going in and saying hi to the staff!

There are two options for visiting Dalsnibba – doing it yourself, or joining a tour.

Visiting with a car

The drive from Geiranger to the viewpoint takes around thirty minutes, but note the road is very narrow and windy – be extra careful when making the trip. Follow highway 63 out of Geiranger (past the Union hotel) and then turn off to the viewpoint. You’ll see the toll station right away.

Note – on Google Maps the viewpoint is called “Geiranger Skysslag AS”, which is the name of the transport company who own Dalsnibba.

The fee to enter is 170 NOK per car. You can buy a ticket online in advance, and the toll booth takes card or cash.

The short drive from the toll booth to the viewpoint consists of hairpin turns, and if you come across a tour bus it can be very tricky. Be careful and follow the bus drivers signals – if he tells you to drive past, drive past. If he tells you to wait, wait.

Parking is ample at the top, and you park right in front of the viewpoint.

You go back down the same way you came.

Visiting without a car

Several tour buses operate from Geiranger, and this may be a good option if you don’t want to risk your car, or perhaps you just want to sit back and admire the view.

This bus operates purely to drive people between Geiranger and Dalsnibba, and it operates whenever there is a cruise ship in town. The total trip takes 2 hours and 15 minutes, and you spend 15 minutes at the viewpoint. They also stop at Flydalsjuvet, a photo stop closer to the village. The bus has recorded English commentary.

The public buses in Geiranger also drive up to the viewpoint. The local bus operates three times a day and stops at Dalsnibba for 20 minutes.

Doing it on your own

Driving from Bergen to the Hardangerfjord

If you don’t want to do it with groups, you can hire someone to take you up there:

Walking: It is possible to park at the lower car park and walk up. In the last few years, the old walking path has been restored by Nepalese Sherpa, and it’s possible now to walk up. The walk is 400m but note – it is steep! You would still need some form of transport to get there; walking from Geiranger is very long and difficult.

Geiranger is a major cruise port, and it’s not uncommon to see a cruise ship in the harbour. If you are travelling on a cruise ship, they likely offer their own excursions to Dalsnibba, though you can save money by doing it yourself.

If you are not travelling with a cruise ship, consider waiting until the evening to go up Dalsnibba; cruise buses can overpower the viewpoint and almost ruin the experience.

You can find the cruise ship schedule here: http://www.stranda-hamnevesen.no/cruise-calls

And now for the most popular talking point in Norway – the weather!

Dalsnibba is located 1500m above sea level, and the west coast of Norway is known for being rainy. That means it’s very common to not see something from the top. Or maybe Geiranger will be covered in clouds, but you’ll have shining sun at the top. In any case, it’s very likely that you won’t see anything.

Additionally, it’s very common for Dalsnibba to have snow all year round. Even if it’s not snowing, the weather can be considerably colder than in Geiranger, and it will also likely be windy. Bring a warm coat if heading up there.

Check the weather on yr.no: https://www.yr.no/place/Norway/M%C3%B8re_og_Romsdal/Stranda/Dalsnibba/

In my experience, I’ve found that I don’t get much of a view about 50% of the time I go.

Is it worth it?

Honestly, absolutely. When I take groups, they love the view. We never last long there – probably 15 minutes outside and another 10-15 minutes in the shop. If the sun is shining, I would 100% recommend it. The only thing to be wary of is how many buses will be up there – check the cruise ship schedule before going.

Hey there, I'm Emma! I'm a tour guide in Norway, and for the last five years I have travelled to all corners of this amazing country to show it to visitors. Now, I'm putting all my tips into this blog, I Love Bergen. I also do walking tours!

The Most Haunted Places in Bergen

New on the Blog

The Fascinating History of Mining in Røros

Driving through the Rondane National Park

A Scenic Drive through Gudbrandsdalen

Why Låtefossen is One of Norway’s Best Waterfalls

Driving from Bergen to the Hardangerfjord