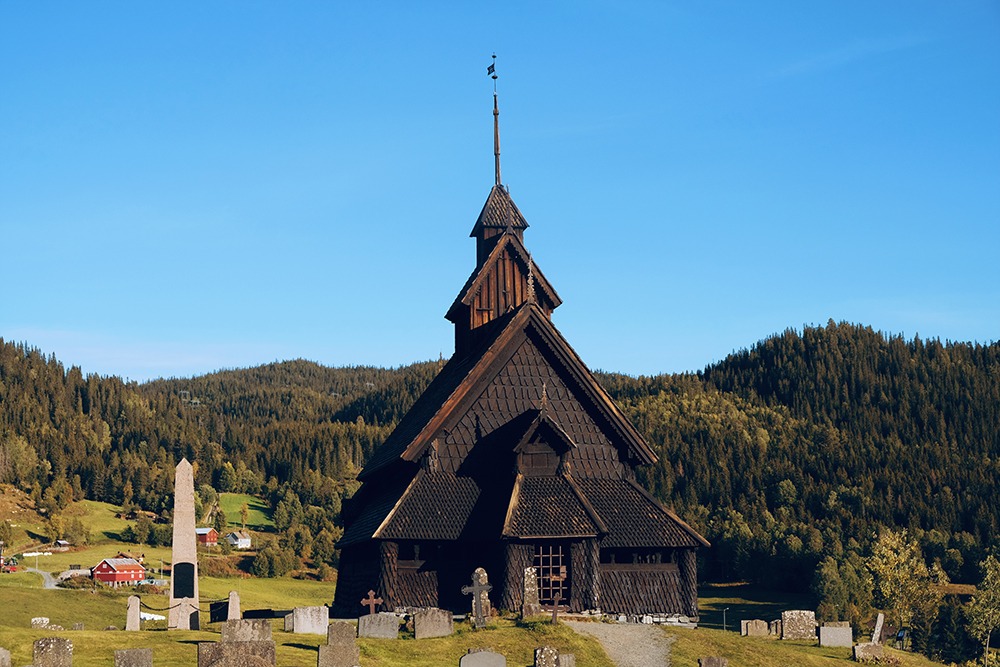 Telemark
Southern Norway
In this article…

The timber on Eidsborg Stave Church dates the church some time between 1250 and 1300, though the exact date is unknown. The first written mention of the church is from 1354, but it’s definitely older than that. There’s indication that another church stood on the site before then.

There are many legends associated with this church. The church is said to have been built by the underjordiske. They are spirit beings who live underground or in nature as invisible creatures next to humans, often near farms.

Like all the 28 stave churches in Norway, Eidsborg has underwent some changes over the years. The chorus was demolished in 1826 and the choir is from 1845-1850. Unlike some other stave churches, Eidsborg lacks foundation stones. Only the nave is original. Also, unlike other stave churches, Eidsborg is built with vertical logs instead of horizontal ones.
The next renovation was in 1927, when architects made efforts to make the church look more like its 17th century appearance. The last restoration took place between 2005-2008.

Eidsborg is one of the smallest stave churches in the country. The inside area is approximately 30m2.

Eidsborg Stave Church is dedicated to St. Nicholas. There is a statue of him inside the church that is from when the church was built. Sadly today the one inside the church is a copy, while the original is now in the Folke Museum (open-air museum) in Oslo.

This statue developed something of a cult in the old times. We know St. Nicholas as the generous saint and origin of Santa Clause. Well, the original Nicholas was the bishop of Myra and served in the 300s. In the 5th century, the worship of saints began with him. Eventually, more than 2,000 churches in Europe were dedicated to him. One of them was Eidsborg. Eidsborg was likely dedicated to St. Nicholas as he was also the stonemasons patron saint. The village Eidgsborg had sharpening stone (whetstone) production.

The wooden figure became a cult icon. Every Midsummer Eve (St. Hans Eve), locals gave the wooden figure gifts. After this, the locals would say prays to the church. They then carried out to a water source, where they washed it. Sweat from the wooden sculpture was supposed to have healing power and cleanse sins. This was very unique that a Catholic symbol would have pagan ritual traditions. It is also found at Røldal Stave Church. This tradition took place until 1750.

The Antiquities Collection took the statue in 1845, and in 1965 Eidsborg got a copy. The ritual is now a historical play that takes place once a year.

Eidsborg Stave Church is one of the very few churches in Norway on a pilgrims road. The other other pilgrims stave church is Røldal. Eidsborg is actually located on the pilgrims road to Røldal.

Eidsborg Stave Church is located as part of the Vest Telemark Museum. If you visit Eidsborg, you must take some time to see the other buildings on the farm. I was able to see this buildings for free while the museum was closed. You can’t, of course, go inside without paying the admission fee. Still, it’s a nice area to walk around in. Here’s what you can see.

This is the oldest non-church wooden building in the Norway and one of the oldest in the world. It’s unsure exactly when this building came to be, but there have bmanyrous studies into this. The construction technique is finndalslaft, and this is not found in Norway after the Black Death in 1349. Furthermore, there is a rune inscription in the attic dated to 1300. Lastly, in recent years the timber has been studied. It is likely that the timber was felled around the year 1167.

This building is the first of its kind in Eidsborg. It was for a woman called Åse Stålekleiv, who is something of a local legend here. Basically, in 1200 she was an extremely wealthy landowner in Eidsborg. She needed a building to store her linen, so her sons built her this one!

You can read all about her on the West Telemark Museum website.

The museum has around 30 buildings collected from local farms. The buildings provide an insight into the history of life on the farms in Telemark.

The museum has twelve different facilities but the head office is here in Eidsborg. This museum has thirty houses from nearby farms that tell about the farming traditions of the area.

The indoor building has exhibitions from West Telemark’s cultural history and folk art. The museum talks about the whetstone that was exported here.

Okay, this is not part of the museum. I just have to mention it. If you’re driving up/down to the museum from Dalen, a famous village, you’ll take this horrible windy road up the mountain to Eidsborg. Shortly after leaving Dalen it’s possible to stop for photos of the beautiful scenery.

Getting there: Eidsborg is a short but steep and windy drive from Dalen, famous for the Telemark Canal. It’s clearly marked on maps, street signs, and Google Maps.

Opening Hours: You can see some the buildings and the stave church all year round, but the museum has specific opening hours. Check the current opening times here.

Admission: You can see the outside of the church and some of the buildings for free, but to go inside you need to pay an admission. Check the current prices here.