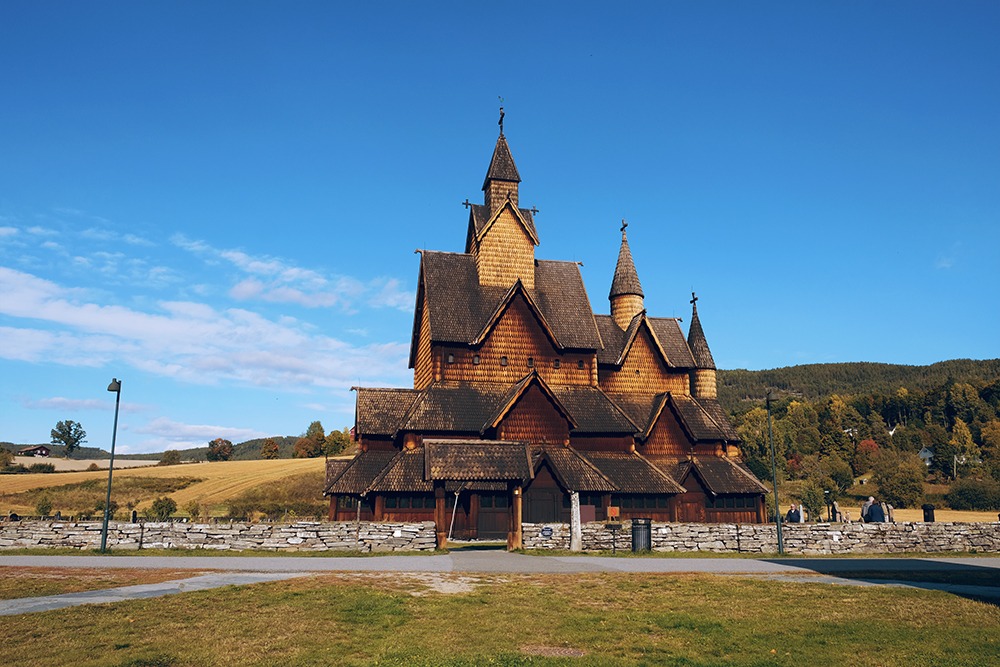 Heddal is one of the most famous stave churches in Norway. After all, it’s the largest! Yepp, Heddal Stave Church is the largest of the 28 remaining in Norway. Moreover, it is one of the most important churches when it came to restoring the other ones in Norway. Heddal was the first church to be described in detail. It is in a written publication called Samlinger til det Norske Folks Sprog og Historie in 1834. The book used Johannes Flintoe’s drawings of the church. It is likely the first architectural drawing of a stave church. Unlike many other stave churches, Heddal has not been affected by fires or natural disasters.

Heddal Stave Church is open to the public during the summer months. Unfortunately, I was unable to get inside during my visit. Still, there’s something special about seeing the church from the outside. Here’s my overview of the church plus what you can see from the outside.

History of the Church

Heddal Stave Church is from some time around the beginning of the 13th century. It’s not known exactly when the church was built. Remains of older building material indicates there was at least one other church on the site. The choir of the current building may have been a nave in an older building.

Heddal was a settlement with a timber industry, good agricultural land, and a growing community. Today it’s not really a settlement; the main town is now Notodden. Notodden is UNESCO World Heritage-listed along with Rjukan for its 20th century industry. Heddal consists of several farms today.
Christianity came to prominence in Telemark in the 11th century. It likely came from Christian monks from the British Isles. They christianised the coast first before moving inland. Since Heddal Stave Church is close to a river, it’s likely that’s how they came to the region. Additionally, crosses and churches went up close to waterways to warn (and promote) Christianity to the community.

Changes over the Years

Heddal Stave Church is first mentioned in written sources in 1315.
After the Reformation in 1536, the church deteriorated. This is when we started losing many of the 1000 stave churches in Norway. The first major renovation took place between 1849 and 1851. The restorers lacked the knowledge another restoration had to be done in the 1950s. This renovation revealed rich wall decorations. Figures and ornaments on the walls were revealed. There had previously been overpainting on the walls.

Today the interior reflects the period around the Reformation, when Catholicism was out and Lutheran was in.

Tourists have been coming to the church for the last 200 years. In recent years, the number of visitors has been 15,000-20,000 per year. For the last 35 years, tours have been available inside the church.

Here’s a legend about how the church was built.

One day, Raud Rygi met a stranger who was willing to build the church. However, the stranger had three conditions for doing the job. One of these conditions had to be done before the church construction finished.
Raud had to either fetch the sun and moon from the sky, forfeit his lifeblood, or guess the name of the stranger. Raud thought the last wouldn’t be too hard, so he agreed.

The building materials had arrived during the first night. The spire was built during the second. It became clear to Raud he wasn’t going to make it: the church was to be finished on day three.

Fearing for his life, Raud took a walk in the fields to figure out the strangers name. Still wandering around, he arrived at Svintruberget (a rocky hill southeast of the church site). He suddenly heard a stange but beautiful song:

Tomorrow Finn will bring us the Moon.Where he goes, the sun and christian blood perish.He brings children to song and play.But now my children, sleep safe and sound.

Raud now knew the stranger was a troll (Trolls drink Christian blood – dead giveaway). The stranger visited Raud the next day to show the completed church. They walked to the church and Raud walked to one of the pillars. He hugged it, as if to straighten it out. Then he said: “Hey Finn, this pillar isn’t straight!” The stranger snapped back “I could be even more bent!” and hastily leaves the church.

Raud solved the riddle. The stranger’s name was Finn, or Finn Fairhair. He was a troll and could not stand the church bells. Since the church was finished, he heard the, so much he had to move far away.

Heddal Stave Church is a triple nave stave church and Norway’s largest. It has a length of 20m and a height of 26m.

Heddal Stave Church has three towers. It has roof surfaces at many angles, and a walkway around the church. Legend has it that the undercover exterior area is where the Vikings kept their shields and swords to protect them from the rain. Is it true? Who knows! But I’ve heard it a few times at stave churches.

Looking closely at the building, you’ll see it has several different architectural styles. These depict the different eras the church has lived through.

The wood carvings show a remarkable combination of biblical motifs and pre-Christian beliefs. The exterior gallery has woodcarvings around the four entrances. The symbols scare off evil powers while also inviting people into the sanctuary of the church.

There is quite a large carpark close to the church, and it is a short walk to the church. Behind it is the Heddal Open Air Museum, which contains farm buildings from the area. In front of the carpark is a large barn, and this is an indoor museum. It has objects from around the area and is where you buy tickets. There’s also a cafe and shop inside.

You can walk around the church for free, but it’s hard to get too close to it. You can see in the photos that the exterior gallery is closed in. They have put up wire fencing in the open spaces and closed off the doors.

A sign is in front of the carpark providing a good overview of the church.
The church is absolutely beautiful to look at. There are many stave churches where I think seeing the outside is good enough. But with Heddal, you should go inside. It’s a rare stave church with a preserved interior.

Getting there by car: Heddal Stave Church is about 1.5 hours from Oslo. It’s very close to the UNESCO World Heritage towns of Rjukan and Notodden (click here to read about that).

Getting there by bus: Amazingly, you can take a singular bus from Oslo Bus Terminal. Take the regional bus to Haugesund and get off at ‘Rygi’. It’s not a major stop, so you need to make it clear to the driver. Heddal Stave Church is 350m from there. Just keep in mind there are only three buses a day. Click here to look for more info.

Opening Hours: The church is open throughout the year. Click here for opening times.

Guided Tours: Offered and highly recommended. They don’t put information signs next to motifs or highlight key points. You need a guide. The tours typically happen whenever you show up, or when there’s enough people.